The Fig Tree .by Knut Jensen. 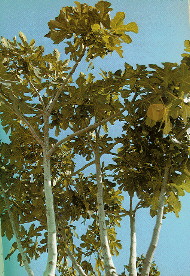 The Fig Tree is used serval times of Jesus to illustrate the meaning for Israel as the covenant people of God,and what will happened whit the land and people. At the time of Jesus the Fig tree was used as as a symbol of welft and richness,of the promised land. 1king.4,25 Sam.3,10.Hos9-10 Joel 1-7.It was quite natural when Jesus spoke about the Fig tree as his one people.Tru the prophetic preaching of Jesus ,the destiny of Israel was relived.He spoke of judgment. And the fulfillment proved that the judgment over people.and land was not hold back.,but there is also future and hope.The word of God is predikting that Israel shall be shaved one day (Rom-11,25-27. When Jesus at Passover was on the way to Jerusalem to end his life.Matthew 21:19 And when he saw a fig tree in the way, he came to it, and found nothing thereon, but leaves only, and said unto it, Let no fruit grow on thee henceforward for ever (in this age). And presently the fig tree withered away .Whit this ackt Jesus show how a an barren people shod be rejected.He also told it in parables Luke 13:6 He spake also this parable; A certain [man] had a fig tree planted in his vineyard; and he came and sought fruit thereon, and found none.
Luke 13:7 Then said he unto the dresser of his vineyard, Behold, these three years I come seeking fruit on this fig tree, and find none: cut it down; why cumbereth it the ground?
Luke 13:8 And he answering said unto him, Lord, let it alone this year also, till I shall dig about it, and dung [it]:Luke 13:9 And if it bear fruit, [well]: and if not, [then] after that thou shalt cut it down. (luke3-.6-9) The years Jesus traveled around Israel and heeled the sick and clean the leprous;and raise the dead and preach the kingdom for the people.They have been witness to his dead and resurrection, but they didn't stop up to think.Only a few of his followers understood the messages.On the way up to Jerusalem Jesus turns to the inhabetens of Jerusalem on his road to calvery( Hebrew;golgata)28 But Jesus turning unto them said, Daughters of Jerusalem, weep not for me, but weep for yourselves, and for your children.
Luke 23:29 For, behold, the days are coming, in the which they shall say, Blessed [are] the barren, and the wombs that never bare, and the paps which never gave suck.
Luke 23:30 Then shall they begin to say to the mountains, Fall on us; and to the hills, Cover us.Luke 23:31 For if they do these things in a green tree, what shall be done in the dry?

Matthew 23:37 O Jerusalem, Jerusalem, [thou] that killest the prophets, and stonest them which are sent unto thee, how often would I have gathered thy children together, even as a hen gathereth her chickens under [her] wings, and ye would not!
Matthew 23:38 Behold, your house is left unto you desolate.
Matthew 23:39 For I say unto you, Ye shall not see me henceforth, till ye shall say, Blessed [is] he that cometh in the name of the Lord.

The Jewish historian writer Flavius Josephus whrited that 1,1million Jews was killed under the terrible war against the romans when Jerusalem fell in year 70 AC from the same source 97000 was send to Egypt and other provinces as slavs

A Jewish deserter, who serve the Romans .As a Jewish scholar of to day, said, we can not live whit him, but we could not live whit out him. ( history of the destiny of Israel in the first century AD)

The judgment over people and country was a fact as later history tells us. Just a remnant of the west wall of the temple stood ,and was later a symbol of nasjonal and religious unity for the jews.From that time the gospel is preach over the hole world. People has been saved and believed the gospel.From wary early on ,that thought that evangelium and imperium was at the same time and both will exist to the kingdom of God When the roman empire was near the end, chaos and violence wood be the dominated under the leadership of Antichrist. In the hole history of Christianity and up to our days this has been topical speech. In the Middle Ages.was it acceptable to calculate to the closing of the age of the Antichrist. That was acceptable of the greatest theologians and historians.They follow closely the political event from the question,Is it time for the Antichrist generation. after generation.watsj for this destruktiv demon.Under his rule shud lawlessness caos plundering tortur mass murder take plac, simultaneous as he was herald for the cekond coming of Christ.

Ezekiel's Vision of the Valley of Dry Bones

Narrated by Academy Award®-winner, Sir Ben Kingsley and starring Academy Award®-winner Christoph Waltz as the voice of Theodor Herzl, It Is No Dream: The Life of Theodor Herzl explores the life and times of Theodor Herzl, father of the modern state of Israel. The film examines how Herzl, a well-known journalist and playwright, an assimilated, Budapest-born Jew, horrified by the Dreyfus trial in Paris and the anti-Semitism he saw spreading across Europe, took upon himself the task of attempting to create a Jewish homeland in Palestine, against all odds.

The Fig tree is green again

Matthew 24:32 Now learn a parable of the fig tree; When his branch is yet tender, and putteth forth leaves, ye know that summer [is] nigh:Matthew 24:33 So likewise ye, when ye shall see all these things, know that it is near, [even] at the doors

In his speech to his disciples abut the endtime Jesus told them that a sign in the time will be the reborn of the nasjon of Israel befor the sekond coming of Jesus.The fig tree is alive agein how cud it be?.The fig tree who withered away is a picture of a nasjon rejekted and scattered.But a fig tree whit green laves is a piture of the nasjon re-establishment .There is also sap in the branches, it is logick that one day soon it will bare fruth.

Romans 11:25 For I would not, brethren, that ye should be ignorant of this mystery, lest ye should be wise in your own conceits; that blindness in part is happened to Israel, until the fulness of the Gentiles be come in.
Romans 11:26 And so all Israel shall be saved: as it is written, There shall come out of Sion the Deliverer, and shall turn away ungodliness from Jacob:
Romans 11:27 For this [is] my covenant unto them, when I shall take away their sins.

The people of Israel has return to their Country and one day God will meet them through Jesus.The end time generation Christians shod know which time they are living in.It is important for us to interpret the sign of time .Matthew-24,33.

We have to acknowledge, that we see piece by piece, it is not easy to know the deeps of the word of God, but Jesus wanted o'er attention on the meaning of the fig tree.And its a sign and a warning of the coming of of o'er lord Jesus Christ.He told his belivers to lift oer heads .

Luke 21:28 And when these things begin to come to pass, then look up, and lift up your heads; for your redemption draweth nigh.Luke 21:29 And he spaketo them a parable; Behold the fig tree, and all the trees;Luke 21:30 When they now shoot forth, ye see and know of your own selves that summer is now nigh at hand Luke 21:31 So likewise ye, when ye see these things come to pass, know ye that the kingdom of God is nigh

Song-of-Solomon 2:12 The flowers appear on the earth; the time of the singing [of birds] is come, and the voice of the turtle is heard in our land;Song-of-Solomon 2:13 The fig tree putteth forth her green figs, and the vines [with] the tender grape give a [good] smell. Arise, my love, my fair one, and come away.

The origins of the Arab -Jewish Conflict .